This historic page from the Flown Apollo 11 Flight Plan, was used during the return journey from the first manned lunar landing in July 1969. It is a burn chart for correcting the trajectory of the Apollo 11 spacecraft known as a Mid Course Correction. This chart is specifically for Mid Course Correction number 5, which occurred at 150 hours into the mission, to ensure the successful re-entry of the Apollo 11 Command Module back into Earth's atmosphere via the narrow corridor, which if too steep would mean the spacecraft would burn up and too shallow send the crew back out into space.

Which reads in part:

“Sheet numbered 3-108a…is part of the entire document that was carried to the Moon in Command Module Columbia on the first lunar landing mission…This sheet is from the detailed timeline section and was located at the beginning of hour 150 in the mission. Page 3-108a has a grid of terms and values associated with the MCC5 or Mid Course Correction engine burn number 5…MCC5 was about an eleven second burn using Columbia’s Reaction Control System thrusters. We fired those engines at 150 hours and 29 minutes into the mission. It was a retrograde maneuver that changed our velocity by some 4.8 feet per second. We did this burn for entry corridor control, which fine-tuned our flight path angle at entry into the earth’s atmosphere.”

Accompanied by a printed excerpt from Michael Collins’s book Carrying the Fire referring to the MCC5 burn, a certificate of authenticity for the Collins autograph from Novaspace, and a photocopy of the cover of the flight plan. A fabulous piece from the personal collection of the Lunar Module Pilot that represents a mission-critical maneuver in the successful return of the Apollo 11 astronauts from their intrepid voyage to the lunar surface.

148:50:48 McCandless: Apollo 11, this is Houston. I have your Midcourse Correction 5 PAD available when you're ready to copy.

Here are the full conversations between Mission Control and the Apollo 11 Crew around the time of the MCC5 burn. 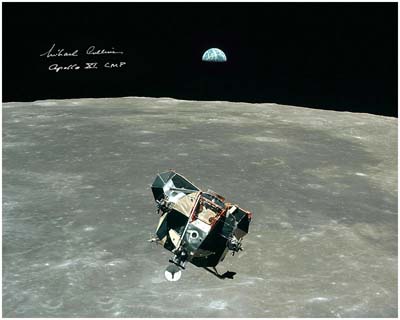