This segment of Lunar Module cargo netting was flown aboard the illfated Apollo 13 mission to the Moon in April 1970 aboard the Lunar Module, Aquaruis

The material came from some cargo netting aboard the Apollo 13 Lunar Module, Aquarius. The Apollo 13 crew presented these pieces of the material to key support personel as a thank you for their part in the mission, with the wording on the card reading, "A Piece of Aquarius’ LM-7, Launched April 11, 1970, Splashdown April 17, 1970, Presented to (Blank), Launch Team Member, From the Apollo 13 crew. Thanks for a job well done!" -

This item is incredibly desirable not only because it contains the flown material, but also because it bares the signatures of the complete flown Apollo 13 crew, (rather than the original crew with CMP Ken Mattingly) - Signed by Jim Lovell, Jack Swigert and Fred Haise.

Framed using archival materials below a 20x16 inch photo of the Apollo 13 Lunar Module after it was jettisoned before reentry to Earth. Includes two AB Emblem 4 inch patches.

The netting came from cargo storage material which was attached to various parts of the LM's interior and can clearly be seen in the photo below of the crew holding an improvised CO2 filter. (Netting material to top left) It's not often that an Apollo flown artifact can be seen in-situ during the mission in a photograph.


Check out our Astronaut Signed Prints 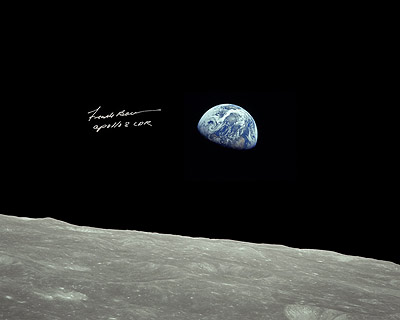