Flown To Lunar Orbit on Apollo 10

Attached to the exterior of the Apollo 10 Command Module hatch

This photo-matched label was fixed to Charlie Brown's primary astronaut access hatch throughout the Apollo 10 moon landing rehearsal mission, the very same hatch the crew climbed into before the mission, and out of afterwards. The label consists of an underlayer of kapton that would have been attached to the Command Module's ablative wall with the label layer adhered directly on top.

This piece is one of the rarest in that unlike all other Apollo flown artifacts, this piece very clearly exhibits the effects of re-entry heat on the Command Module as it passed through Earth's atmosphere.

The effects consist of:

• Blast marks: The darker spots on the label were caused by the 5000°F (2760°C) heat of re-entry into Earth's atmosphere as it pierced through the label, exploding outwards, exposing the layer of kapton beneath, and charring the surrounding area. Where exposed, the underlayer of kapton is bubbled from the same source of re-entry heat. The blast marks and exposed kapton are most evident on the "R" and "E" sections of the label.

• Scorch marks: The pale lines evident on the label show a clear effect of re-entry heat, wearing away the color of the label in a directional pattern. This also had the effect of imprinting the honeycomb pattern from where the label was attached to the Command Module hatch ablative exterior beneath.

• Heatshield bubbling: The label exhibits consistent bubbling throughout from where the re-entry heat caused the honeycomb layer beneath the label to react.

• Adhesive: The rear side of the label exhibits the original adhesive. The adhesive clearly shows the honeycomb pattern from where it was attached to the Command Module hatch ablative exterior, having been pressed against it during re-entry, creating a clear pattern of separation.

Through extensive research and photo matching, we can conclude with absolute certainty that this was the very same label from the Charlie Brown primary astronaut access hatch.

This label has been photo-matched to mission photographs.

The Apollo 10 CSM in lunar orbit, with the label circled in the magnified red square

After returning to Earth, the Apollo 10 Command Module underwent decontamination and decommissioning. During this process, the kapton foil surrounding the spacecraft was removed and discarded, and the hatch labels were destined to meet the same fate. Remarkably, this one was saved and recovered by North American Aviation manager, Chuck McKim.

During WWII, Chuck joined the U.S. Navy, and his ship transported British and Canadian troops to Normandy on D-Day. In 1948, he was recalled to active duty and taught electronics at the Naval War College. He later joined North American Aviation, working as an electronics technician on various missile programs, including the Navaho G-26 and Hound Dog/B-52. He culminated his career as a Post-Flight Test Engineering Technician on the Apollo Program and was a member of the Recovery Team on the U.S. carriers that sailed out into the Pacific Ocean to recover the Apollo Command Modules after they splashed down. Chuck retired from NAA/Rockwell in 1975 at the conclusion of the Apollo-Soyuz Test Project.

About the Boost Cover Release:

The boost cover release label indicated to the ground crew where to insert the necessary tool to release the boost cover in the event of an emergency on the pad. This action would allow the ground team to egress the crew as quickly as possible; a system developed after the tragic Apollo 1 fire. 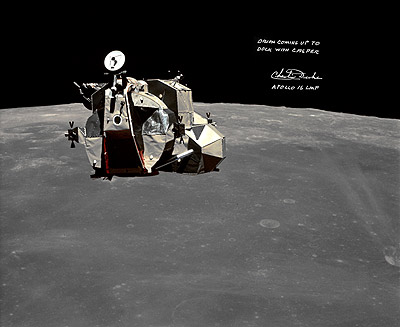