This double sided page entitled, 'Maneuver' was taken from the Apollo 8 'Updates' book, Part number: SKB32100042-201, Serial number: 1003, which flew onboard the Apollo 8 Command Module during the first manned mission to the Moon in December 1968.

The page has been hand signed by Commander Frank Borman and Command Module Pilot, Jim Lovell, and also comes with photo COAs and a photo CD of Borman and Lovell signing and holding the page.

The page features extensive in-flight hand written notations by Borman, given to him by CapCom Ken Mattingly -
Excerpt from Apollo 8 Mission Transcript:

On top of the 2nd page is written "2nd fly-by". This was another emergency maneuver relayed from Earth to Captain Borman. "2nd" meaning an update of a previous calculation of the same maneuver and "fly-by" being the name of the maneuver. This maneuver would have been used to swing the spacecraft around the moon without going into orbit using the moons gravity as a sling-shot to return them safely to Earth in case of loss of power or communications. This page was taken from the Apollo 8 flown "updates" book which had been in the possession of Apollo 8 astronaut Jim Lovell from 1968 until 2008

A truly great and important artifact from a historic mission, in this, the 50th Anniversary year of Apollo 8 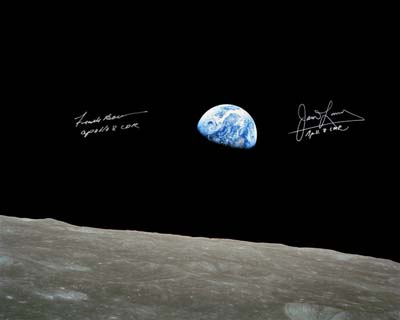